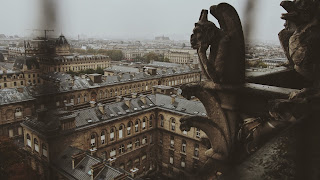 1. A PAGAN CITY LIES BELOW THE CATHEDRAL.

The Île-de-la-Cité on which Notre-Dame de Paris now stands was once a Gallo-Roman city known as Lutetia. The cathedral may have been built right over remnants of a temple: Around 1710, pieces of a sculpted altar dedicated to Jupiter and other deities were discovered during an excavation under the choir (although it remains unclear if this is evidence of an ancient temple, or if the pieces were recycled there from another location). Additional architectural ruins found in the 1960s and ’70s, many dating back to this ancient era, lie in the archaeological crypt located beneath the square just in front of Notre-Dame.

The cathedral contains one of the oldest surviving wood-timber frames in Paris, involving around 52 acres of trees that were cut down in the 12th century. Each beam is made from an individual tree. For this reason, the lattice of historic woodwork is nicknamed “the Forest.”

The cathedral was one of the earliest structures built with exterior flying buttresses. They were constructed around its nave in the 12th century to lend support to the thin walls after the need for more light in the incredibly tall church required larger windows and thus greater supports. The exposed flying buttresses became an iconic aspect of Gothic design, and although there’s some debate over whether Notre-Dame was the first church to have them, they certainly set the trend in sacred architecture.

At first glance, Notre-Dame’s two towers appear like identical twins. Closer examination reveals that the north tower is, in fact, a bit bigger than the south. As with all the elements of the cathedral, they were built over time, and reflect how the cathedral is more of a collage of architectural trends and leadership than the culmination of one person’s vision 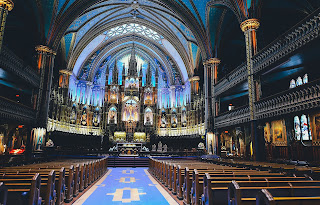 5.ITS BELLS WERE ONCE MELTED DOWN FOR ARTILLERY.

The kings weren’t the only part of Notre-Dame destroyed during the French Revolution. The cathedral, like other churches around France, was transformed in the late 18th century from a Christian space and rededicated to the new Cult of Reason. All 20 of its bells—except the colossal 1681 bourdon called Emmanuel—were removed and melted down to make cannons.

6. NAPOLÉON AND VICTOR HUGO SAVED IT.

When Napoléon Bonaparte decided to have his 1804 coronation as emperor in Notre-Dame, the building was in bad shape. Centuries of decay as the city developed and changed around it, as well as the vandalism of the French Revolution, had left it on the verge of demolition. For years it had been used as little more than a warehouse. So when Napoléon declared its return to church use and hosted his grand ceremony within his walls—an event in which he famously crowned himself—it brought Notre-Dame to new prominence.

7. ITS MONSTERS ARE MODERN, NOT MEDIEVAL.

Some of the most popular images of Notre-Dame are from the perspective of its gargoyles or chimera (the carved monsters that don’t act as waterspouts). Few visitors would guess that the fantastic creatures now on the cathedral weren’t there until the 19th century; they were added between 1843 and 1864 during the radical restoration overseen by Eugène-Emmanuel Viollet-le-Duc.

8.ITS SPIRE WAS A SAINTLY LIGHTNING ROD.

If you look at a photo of the cathedral from before the fire, you’ll spy a rooster on top of the spire (which sadly seems to have collapsed during the fire). This rooster was not a purely decorative bird. In 1935, three tiny relics—an alleged piece of the Crown of Thorns and some bits of Saint-Denis and Saint Genevieve (the city’s patron saints)—were secured inside the metal bird’s body. The idea, the story goes, was to create a sort of spiritual lightning rod to protect the parishioners within. 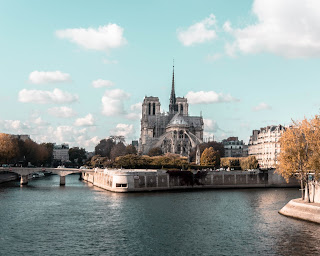 9. THE ORGAN IS THOUGHT TO BE THE LARGEST IN FRANCE.

The Notre-Dame organ involves almost 8000 pipes (some dating back to the 18th century) played with five keyboards, making it the biggest pipe organ in France (although some claim that Saint-Eustache has a larger one). While there are some slashes on the wood of the organ loft—damage from the French Revolution, when its fleur-de-lis symbols were carved off—it was restored in 2013 to mark the 850th anniversary of the cathedral.

Mostly overlooked beneath the crowds of tourists milling around outside Notre-Dame is a diminutive circular marker with an eight-pointed bronze star embedded in the cobblestones. It’s engraved with the words Point zéro des routes de France and is the point from which distances are measured from Paris to other cities in France. It was placed there in 1924, although it had to be temporarily dislodged in the 1960s during the excavations for what was intended to be an underground parking garage. Those construction plans were thwarted when workers turned up architectural ruins—now kept in the archaeological crypt.