This lightweight, bug-like drone might be small, but its photography chops are among the most impressive around. 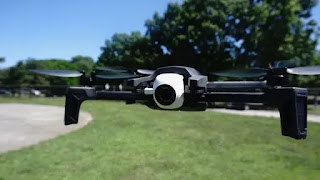 Its camera has 180 degrees of vertical range, which enables it to take photos directly upwards – a feat no other drone can match. It also has a 2.8x zoomable lens with no image quality reduction.
The Parrot Anafi is a particularly good choice for selfie fans. Its Follow Me mode tracks your movements, adjusting automatically for more photogenic angles, and its SmartDronies modes – Orbit, Parabola, Boomerang and Tornado – cause the drone to fly around you in various circles and arcs.

The main drawback is the Parrot Anafi’s lack of obstacle avoidance, which makes it hard to recommend to new users. It’s also a shame that a couple of flight modes are locked away as extra in-app purchases after you’ve paid for the drone.