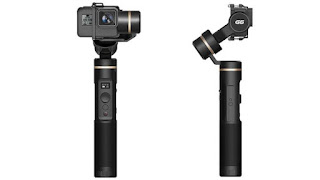 Great battery life. Functionality control via the app. Physical controls. An OLED status LCD screen for quick checking of settings. A splashproof design. The FeiyuTech G6 ticks a hell of a lot of boxes for the action camera user, and is a really solid choice of stabilizer whether you’re using a GoPro Hero, Sony RX0 or some other type of action camera such as a Yi 4K. It’s designed to operated at an angle where the gimbal never obscures the camera’s screen, meaning you can always get a precise read of what you’re shooting. Just be wary if you’re using the on-board mic; the gimbal motor sits rather close and sometimes gets picked up.